NETANYA, Israel — More martial than art, this form of fighting extols the virtues of a poke in the eye and a timely kick to the groin. Its masters insist it is not a sport, because there are no rules, except for one: to survive. 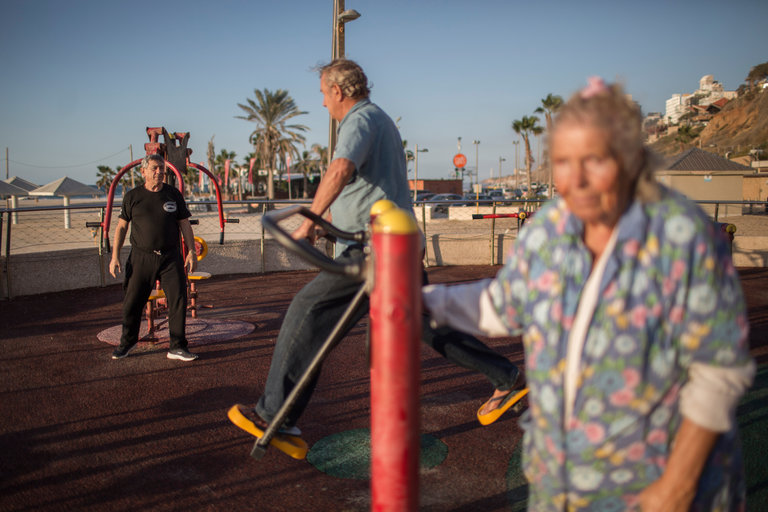 Haim Gidon, left, a claimant to the Krav Maga grandmaster title, at the beach in his hometown, Netanya, Israel. “Even with eye gouging, you have to know how,” he said. “You have to bring your thumb all the way in.” Credit Uriel Sinai for The New York Times

Global terrorism has increased the demand among law enforcement agencies and civilians abroad for instruction. And in a kind of return compliment, a detailed manual titled “How to Survive in the West,” and attributed to the Islamic State, advised jihadist recruits to learn the moves.

But about 80 years after the Krav Maga street-fighting system was conceived, its champions are sparring among themselves. The man credited with creating Krav Maga, Emrich Lichtenfeld, known as Imi, a boxing and wrestling champion who immigrated from Czechoslovakia and settled in the coastal town of Netanya, died in 1998 at the age of 88.

Now his disciples, and the disciples’ disciples, are competing over whose school is the most authentic and who is the real grandmaster. It is like a family fighting over an inheritance.

“The martial arts world is replete with controversy about who is the top instructor within a given discipline,” said David Kahn, the chief instructor of the American branch of the Israeli Krav Maga Association that Mr. Lichtenfeld had established. “Unfortunately, Krav Maga finds itself embroiled in this same type of internecine conflict, as Imi never appointed a successor.”

One of the claimants to his throne is Haim Gidon, 73, who leads the association. Mr. Kahn, his longtime student, was recently in Israel to help produce a documentary aimed at recording the history of Krav Maga, weighing the various claims to Mr. Lichtenfeld’s mantle and validating Mr. Gidon’s credentials. 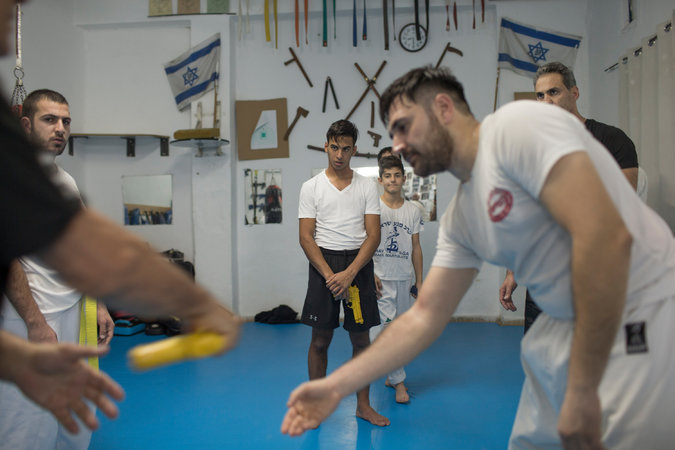 Israelis practicing Krav Maga during a lesson at Mr. Gidon’s gym in Netanya. There is no competitive Krav Maga circuit, because the idea is to break all the rules, not play by them. Credit Uriel Sinai for The New York Times

Imi Lichtenfeld was born in 1910 in Hungary and reached adulthood in Bratislava, in what was then Czechoslovakia. The son of a police detective who also ran a wrestling club, Mr. Lichtenfeld excelled in various athletic disciplines and is said to have developed his street fighting and mixed martial arts skills to protect his community from attacks by anti-Semites and marauding fascists.

Mr. Lichtenfeld set off for the British Mandate of Palestine in 1940, and he began training the Zionist forces in skills like stick fighting and bayonet tactics.

After the state of Israel was established in 1948, he became the Israeli military’s close-quarters combat chief. The system has since evolved into a vital component of Israeli combat training. Elite forces endure many hours of intense coaching. There is no competitive Krav Maga circuit, because the idea is to break all the rules, not play by them, although the army did institute an annual Krav Maga contest a few years ago.

The chief producer of the documentary, Paul Szyarto, an American fitness guru and co-founder of VMMA, a chain of mixed martial arts training centers, accompanied Mr. Kahn to Israel and interviewed Mr. Gidon for the movie.

The best defense, said Mr. Gidon — who drove a tank in the 1967 and 1973 Israeli wars — is to avoid getting into a confrontation in the first place and, if possible, to run. “But if there’s no choice and there’s a knife to your throat, you’ve got to know how to face it,” he said. “Even with eye gouging, you have to know how. You have to bring your thumb all the way in.”

For Mr. Szyarto, Krav Maga encapsulates the essence of Israeliness: resourcefulness, versatility and a mind-set of doing whatever it takes to win. Mr. Gidon said he agreed, at least in the military context, but also preached humility. “There is no such person as a fearless person,” he said. “The point is to deal with the fear.”

Mr. Gidon, who worked in the diamond industry after being released from military service, said he first met Mr. Lichtenfeld in 1969 and began training with him. As evidence of how far their relationship went back, Mr. Gidon related that Mr. Lichtenfeld attended his wedding in 1974.

As further proof that Mr. Gidon can claim to be the rightful heir, Mr. Kahn produced a notarized document signed by Mr. Lichtenfeld in 1996, in which he graded his top trainees, granting his principal student, Eli Avikzar, and Mr. Gidon what was then the highest rank, 8th Dan, followed by two ranked 7th Dan and one ranked 6th. 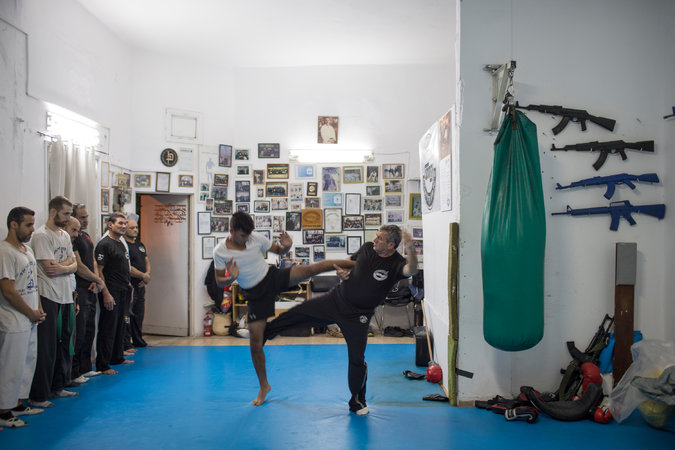 Mr. Gidon teaching at his gym. He prefers to remain above the fray regarding seniority in the Krav Maga world. “A teacher teaches,” he said. “Who should judge? Those who learn.” Credit Uriel Sinai for The New York Times

Some online skeptics say Mr. Lichtenfeld was so enfeebled by then that he would have signed anything if asked.

Mr. Lichtenfeld’s association and its disciples spawned other organizations such as the Krav Maga Federation, the Israeli Krav Maga Federation, Krav Magen and Krav Maga Global, all considered reputable and authentic schools and all vying for business abroad. Graduates of those schools, in turn, went on to found the next generation of organizations — though purists, who trace Krav Maga instructors’ lineage and pedigree almost like a rabbinical dynasty, consider some of them fake.

Another claimant to the title of grandmaster is Haim Zut, 82, who was listed as 7th Dan in Mr. Lichtenfeld’s document. Mr. Zut, who leads the Krav Maga Federation and runs several clubs in Israel, said in an interview that he had been Mr. Lichtenfeld’s first student and that as the oldest surviving disciple, he should be considered the titleholder.

Then there is Eyal Yanilov, 58, who trained with Mr. Lichtenfeld and Mr. Avikzar and was also listed as 7th Dan. His Krav Maga Global organization’s website credits him as being “the only person in the world to whom Imi presented the ‘Founders Diploma of Excellence.’ ”

Ran Nakash, 39, who led courses for the military’s Krav Maga instructors and runs a boxing and Krav Maga gym in Tel Aviv, called the argument over Mr. Lichtenfeld’s legacy nonsense. “There is no heir,” he said. “Everyone is doing their own thing.” Mostly, he said, it is the military that sets the tone on training.

Mr. Nakash, bearded and tattooed, said it doesn’t matter how big or strong your attacker is if you go for weak spots like the eyes and groin. “If I’ve been stabbed, am I giving in or not?” he said, adding that a reaction in real time can mean staying alive.

One recent weeknight, about a dozen sweaty men and teenage boys trained at Mr. Gidon’s no-frills dojo, or studio, in a residential neighborhood of Netanya. They practiced fending off a knife attack and getting out of a stranglehold, repeating the moves until they came naturally.

United States special forces stationed in the region recently attended a training session here, and Mr. Gidon was leaving the next day for a training session in Poland. His so-called Gidon System of Krav Maga developed the concept of “retsef,” continuous motion allowing for a simultaneous combination of defensive and offensive moves.

Mr. Gidon said he preferred to remain above the fray regarding seniority in the Krav Maga world. “A teacher teaches,” he said. “Who should judge? Those who learn.”